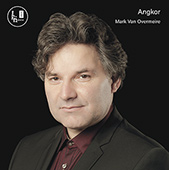 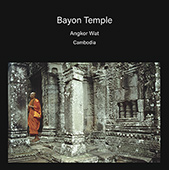 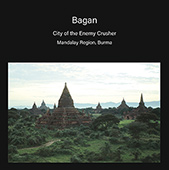 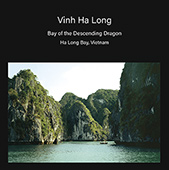 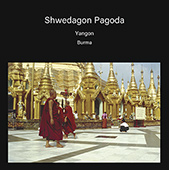 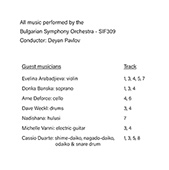 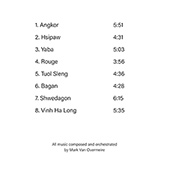 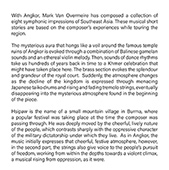 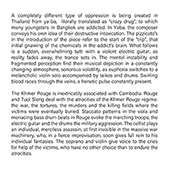 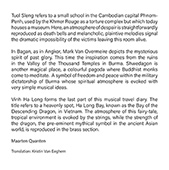 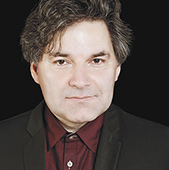 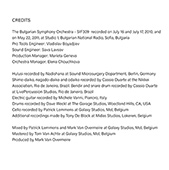 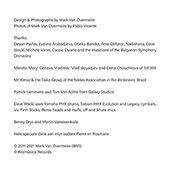 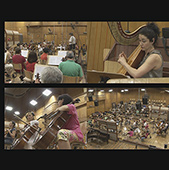 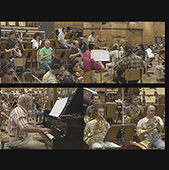 The music on "Angkor" is inspired by places and events in Southeast Asia. All music is performed by the Bulgarian Symphony Orchestra. Guest musicians, such as Grammy Award winning drum legend Dave Weckl (known especially for his work with jazz icon Chick Corea) and avant-garde cellist Arne Deforce, participate on "Angkor".

All music composed, orchestrated and produced by Mark Van Overmeire

With "Angkor", Mark Van Overmeire has composed a collection of eight symphonic impressions of Southeast Asia. These musical short stories are based on the composer’s experiences while touring the region.

The mysterious aura that hangs like a veil around the famous temple ruins of Angkor is evoked through a combination of gamelan sounds and an ethereal violin melody. Then, sounds of dance rhythms take us hundreds of years back in time to a Khmer celebration that might have taken place here. The brass section evokes the splendor and grandeur of the royal court. Suddenly, the atmosphere changes as the decline of the kingdom is expressed through menacing Japanese taiko drums and rising and fading tremolo strings, eventually disappearing into the mysterious atmosphere found in the beginning of the piece.

"Hsipaw" is the name of a small mountain village in Burma, where a popular festival was taking place at the time the composer was passing through. He was deeply moved by the cheerful, lively nature of the people, which contrasts sharply with the oppressive character of the military dictatorship under which they live. As in "Angkor", the music initially expresses that cheerful, festive atmosphere, however, in the second part, the strings also give voice to the people’s pursuit of freedom, working from within the depths towards a violent climax, a musical rising from oppression, as it were.

A completely different type of oppression is being created in Thailand from ya-ba, literally translated as “crazy drug”, to which many youngsters in Bangkok are addicted. In "Yaba", the composer conveys his own idea of their destructive intoxication. The pizzicato’s in the introduction of the piece refer to the start of the "trip", that initial gnawing of the chemicals in the addict’s brain. What follows is a sudden, overwhelming tutti with a violent electric guitar, as reality fades away, the trance sets in. The mental instability and fragmented perception find their musical depiction in a constantly changing atmosphere, sonorous volatility, as euphoria switches to a melancholic violin solo accompanied by taikos and drums. Swirling blood races through the veins, a frenetic pulse constantly present.

The Khmer Rouge is inextricably associated with Cambodia. "Rouge" and "Tuol Sleng" deal with the atrocities of the Khmer Rouge regime: the war, the tortures, the murders and the killing fields where the victims were eventually buried. Staccato patterns in the viola and menacing bass drum beats in "Rouge" evoke the marching troops; the electric guitar and the drums the military aggression. The cellist plays an individual, merciless assassin, at first invisible in the massive war machinery, who, in a fierce improvisation, soon gives full rein to his individual fantasies. The soprano and violin give voice to the cries for help of the victims, who have no other choice than to endure the atrocities.

"Tuol Sleng" refers to a small school in the Cambodian capital Phnom-Penh, used by the Khmer Rouge as a torture complex but which today houses a museum. Here, an atmosphere of despair is straightforwardly reproduced as death bells and melancholic, plaintive melodies signal the dramatic impossibility of the victims leaving this room alive.

In "Bagan", as in "Angkor", Mark Van Overmeire depicts the mysterious spirit of past glory. This time the inspiration comes from the ruins in the " Valley of the Thousand Temples" in Burma. "Shwedagon" is another magical place, a colorful pagoda where Buddhist monks come to meditate. A symbol of freedom and peace within the military dictatorship of Burma whose spiritual atmosphere is evoked with very simple musical ideas.

"Vinh Ha Long" forms the last part of this musical travel diary. The title refers to a heavenly spot, Ha Long Bay, known as the 'Bay of the Descending Dragon', in Vietnam. The atmosphere of this fairy-tale, tropical environment is evoked by the strings, while the strength of the dragon, the pre-eminent mythical symbol in the ancient Asian world, is reproduced in the brass section.